Ashlynne was gone on Friday which meant Casey and I had time to ourselves. It seems like that would be a good thing, but the pattern that we can’t seem to break is fighting once she leaves. It’s like her being gone and us being alone gives us a new freedom to address issues whenever we want and brings us to a realization that things aren’t quite right.

If you’ll remember, the last time she was gone was the time I ran away to the park. The time before that was the breakdown over a cancelled date to see the Steeldrivers. And so on and so forth. Every time we have one of these fights, I feel like we come out on the other side more emotionally connected and with a better understanding of each other. I even feel like we have a game plan of preventing similar blowups in the future, but I suppose I’ve been proven wrong.

So Friday night started off rough before Ashlynne even left. In fact, things got rocky as soon as Casey got home from work. We ended up in a small disagreement that we were able to hash out before Ashlynne returned from softball practice. I was excited as I felt like we had recognized our disconnection and taken immediate steps to repair. Not the best repair we’ve ever had, but in my mind, we were reconciled. I guess I was deceived.

It wasn’t an immediate blowup, but man did things hit the fan hard later that night. Everything was going quite well after our discussion. We were on a mission to come up with a game plan for getting the house packed over Spring Break so we sat down in front of my computer and made a list of ideas based off various articles I had found on Pinterest. Then we made a run to the liquor store for boxes and then Office Max and Big Lots for packing supplies. Not the most romantic evening, but it was nice time together. It wasn’t until we got in bed that things got bad. Sadly, our topic of disagreement was the same one as earlier. You know, the one I thought we had resolved.

It’s a topic that has plagued our marriage almost from day 1: physical intimacy. We’ve had so many fights come from that topic that the thought of it can make me cringe. So the topic came up as were lying in bed. As we started to try and repair it was clear that this wasn’t going to be like any other fight. Casey was beyond angry and frustrated, and I was beyond hurt. It wasn’t a good combination and led to one of the most explosive arguments we’ve ever had. But you know what else it led to? A flood of honesty and transparency.

Words were spoken that should have left our lips years ago. Our hearts were poured out in front of each other and for the first time, we were able to talk about physical intimacy in a new light, the same light. As we ended the night we hadn’t solved all of our issues or even this disagreement, but we had been able to draw closer together and reconnect.

Although I am thankful for the progress we made through this fight, I can’t say that I’m not fearful that it leads nowhere. We seem to be stuck in this cycle of disconnection, disagreement, and reconnection with hopes of staying connected more consistently, but ultimately, we keep finding ourselves back at disconnection. It’s like we see the immediate results of a deeper connection, but it quickly fades as we flow back into our normal routine, back in to what’s comfortable for us, which often means our marriage isn’t a priority. Then it all blows up when Ashlynne goes away for the weekend, and the distractions are gone.

Maybe next time will be different. Ashlynne will be gone for a full 10 days so that should give us enough time to establish some new routines and build on this emotional connection. That’s my prayer. In the meantime, we’ll be packing for our move to the new home. Did I mention we’re under contract? Let the chaos begin. 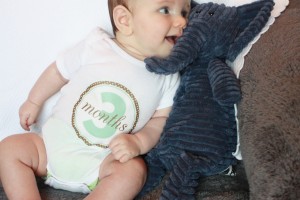 I can’t believe it has already been 3 months since sweet Silas blessed us with his presence. These past few weeks have been crazy with daddy starting to teach again and sissy (Ashlynne) starting her freshman year at high school. I looked quite odd wearing a baby around at high school open house, that’s for […]